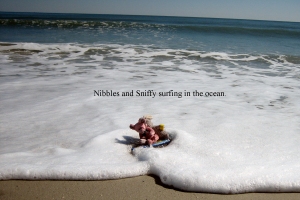 “We’re going to the beach!” Sniffy hollered to his friends Nibbles and Twitch.

“How do you know? Nibbles asked.

“Jacob is going to visit his grandparents who live by the beach,” Sniffy said, “and he’s taking us along.”

Sure enough, the next day Grandpa and Grandma took Jacob to the beach. He insisted on taking his three toy mice along.

“Be careful,” Grandma said. “You don’t want to lose them in the ocean.”

Jacob set the mice on his beach towel and went to help Grandpa and Grandma build an enormous sandcastle with a large moat around it. The mice sat quietly and watched. When it was finished, Grandpa said, “Let’s go for a walk.”

“What about my mice?” Jacob asked.

“Oh, just leave them here on your beach towel,” Grandma said. “No one would steal a little boy’s toy mice.”

They left the mice on the towel by the castle and walked away. Big mistake.

“Now is our chance to have some fun,” Sniffy said. “Let’s go play on the sandcastle.”

Over and over, the mice raced up and slid back down the steep sides of the sandcastle. They had never had so much fun. Suddenly, a huge ocean wave rolled in. The mice scrambled to the highest tower of the sandcastle and watched in horror as wave after wave came in.

Soon the castle started to fall apart. The mice screamed, “Help! Help! We’re going to get washed out into the ocean!”

Little Twitch slipped and fell headfirst into the water. Sniffy grabbed his tail at the last split second and tugged him back up. When the next wave flowed back to the ocean, they all jumped down and scrambled to a drier spot up the beach.

“I can hardly breathe,” Nibbles said.

“My heart is bumping,” Twitch said, “and my tail hurts from you pulling on it.”

The three mice lay on the warm, dry sand until they felt better. Soon Sniffy said, “I’m bored. Let’s do something exciting.”

“Let’s try out the little surfboard Jacob brought along,” Sniffy said. “These waves are humongous!”

“You’re not going out on the ocean, are you?” Nibbles asked.

“What? Miss the chance of a lifetime to go surfing?” Sniffy asked. “Come on, guys. What could happen?”

“A lot of things,” Nibbles said. “A shark could eat us. A pelican could snatch us up. We could drown.”

“Are you scared?” Sniffy asked.

“Don’t forget to turn over every ten minutes,” Sniffy advised.

“How will I know when it’s ten minutes?” Twitch asked.

“Oh, Twitch,” Sniffy said. “Just lie there until your tail feels hot; then turn over. Don’t go to sleep either, or you’ll burn it.”

Twitch lay down and stretched out his long white tail.

Sniffy and Nibbles raced to the edge of the ocean. They hopped onto Jacob’s toy surfboard and waited. Whoosh! The next wave swished them way up onto the beach.

“Wow! That was fun!” Nibbles squealed.

They kept racing back to the ocean. Sniffy fell off the surfboard once, just as a pelican swooped down and snatched up a fish near them.

Nibbles hauled Sniffy back up by his tail. He gasped for air and shook the water out of his fur. “I could have been that bird’s dinner,” Sniffy said. They checked to see if the pelican was still overhead, then climbed back on and went for another wild ride.

All of a sudden, they saw Twitch hopping around, holding his tail and howling. They rushed over.

“I burned by tail!” Twitch wailed.

“Oh, my!” Sniffy said. “Did you forget to turn over when it felt hot?”

“I must have fallen asleep.”

“Let’s put some of Jacob’s suntan lotion on it,” Nibbles said.

They helped Twitch lie down on the beach towel in the shade of the cooler. They pushed the surfboard back into Jacob’s beach bag and lay down for a rest.

A few minutes later, Nibbles whispered, “Look! Jacob, Grandpa and Grandma are coming back. Quick, lie down on the towel like we were when they left, so they won’t know we were playing.”

“Hey, our sandcastle washed away,” Jacob said, when he returned.

“Look at your mice!” Grandma said. “Sniffy and Nibbles are soaked, and Twitch’s tail looks greasy. I wonder what happened.”

“Maybe the mice were playing in the ocean,” Jacob said. “You never know what they do when you’re not looking.”

“Do you really think so?” Grandma asked, as she winked at Grandpa.

At the same time, Sniffy winked at Nibbles and Twitch as they lay quietly on the towel. They didn’t move a muscle . . . until the next time when no one was watching, that is.