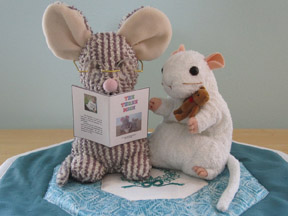 “Hi, little buddy!” Sniffy said. “Are you ready to read a story?”

“You said I’ll get smarter every time I read a book. Is that true?” Twitch asked.

“You sure will! Which one do you want to read today?”

Twitch tucked his favorite Teddy Bear under his arm, because Teddy Bears like to hear stories, too.

Sniffy put on his glasses and started to read.

Once upon a time there were three mice –– a great big papa mouse, a middle-sized mama mouse, and a tiny little baby mouse. They lived in a little mouse house on the edge of the forest.

In the bedrooms, there were three beds –– a great big bed for the papa mouse, a middle-sized bed for the mama mouse and a tiny little bed for the baby mouse.

One morning the mama mouse set the table with a red-checkered tablecloth and matching napkins. She put some cheese on each mouse’s plate for lunch. She gave papa mouse a huge hunk of awful-smelling Limburger cheese on his big plate. She put a slice of Swiss cheese on her middle-sized plate. She put a small dab of soft cheese on baby mouse’s little plate.

They weren’t quite hungry enough, so they decided to take a walk in the woods before lunch. Someone forgot to close the front door. BIG MISTAKE!

Soon after they left, an orange-striped cat came strolling past the house where the mice lived. He smelled something funny and decided to look inside. The door was open and no one seemed to be home. 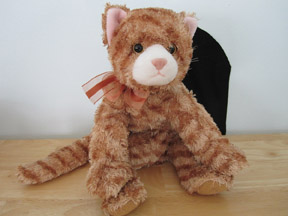 He saw the three chairs. He sat in papa mouse’s great big chair. It was too hard. He sat in mama mouse’s middle-sized chair, but it was too soft. He tried to sit on baby mouse’s tiny little chair, but it broke. “Oops,” said the cat.

The cat wandered into the kitchen and saw the cheese on the plates. He sniffed the awful-smelling Limburger cheese on papa mouse’s big plate and said, “That stuff stinks like someone’s dirty socks!”

He sniffed the Swiss cheese on mama mouse’s middle-sized plate and said, “There must be something wrong with this cheese. It’s full of holes!” 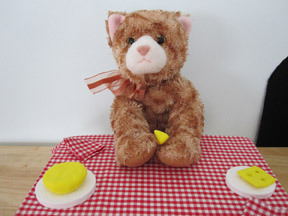 The cat sniffed baby mouse’s soft cheese on his tiny little plate. “Yum! This is delicious.” He licked the whole plate clean.

When he tried to lie down on baby mouse’s tiny little bed, it was too small. He was tired, though, so he laid his head on the bed and covered himself with baby mouse’s blanket. Soon the orange-striped cat was sound asleep. 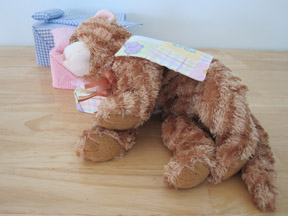 Not long after that, the three mice came back from their walk in the woods. “Hokey Doodle!” papa mouse said. “We forgot to close the front door when we left. I hope no one came in while we were gone.”

They soon discovered that someone had indeed been in their house. Papa mouse said, “Hey, someone has been sitting in my big chair!”

Mama mouse said, “Someone has been sitting in my middle-sized chair, too.”

“Hokey Doodle!” baby mouse said, “Someone sat on my chair and broke it all to pieces!”

Then they all looked at the table. “Hey,” said papa mouse, “someone has been sniffing my big piece of awful-smelling Limburger cheese.”

“Oh, no,” mama mouse said. “Someone has been sniffing my middle-sized piece of Swiss cheese, too.”

The three mice went to the bedrooms. Papa mouse said, “Hey, someone has been lying on my big bed.”

Mama mouse said, “Someone has been lying on my middle-sized bed, too, and messed up the blankets.”

The baby mouse peeked around the corner into his own bedroom and gasped, “Hokey Doodle! Looks what’s lying on my bed! A cat!”

Then the baby mouse, which usually could only talk in his squeaky little voice, screamed as loud as he could, “Get off of my bed!”

The frightened cat jumped almost as high as the ceiling, dashed down the hall and out the front door. They never saw that cat again. The three mice lived happily ever after.

“Is that the end of the story?” Twitch asked.

“It was good, but did the hungry little mouse ever get something to eat?”

“Yes, his mom gave him some more soft cheese,”

“His chair was broken. How could he sit down to eat?”

“Well, Papa mouse set him on his lap until they finished eating. Then he glued baby mouse’s chair back together.”

“We read another book, Sniffy. Am I smarter now?”

“You sure are! We’ll read another one soon.”