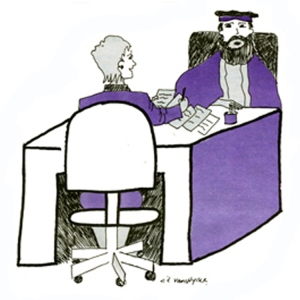 I’m a member of the search committee that is looking for a new pastor for our church. John Bunyan has just arrived at my office to apply for the position. Here he is now.

I understand you’d like to become our pastor here.

Where did you learn to preach, Mr. Bunyan? In seminary?

No, not there, either.

Did you at least finish high school?

Do you mind if I ask which doctrinal teaching you lean toward, Calvinist or Armenian?

Do you have some experience in preaching?

Yes, I preached in my little home church.

Well, not for long, Ma’am, because I spent some time in prison.

Prison? How long were you there?

(Oh brother! Which one of the committee picked this one?) Do you have a family, Mr. Bunyan?

Six children? How were you able to support such a large family during your time in prison?

I made shoelaces, Ma’am.

No, once I hammered a violin out of iron. My father was a tinker, so I learned to make all kinds of things. Another time I carved up the leg of my prison stool and made a flute out of it, so we’d have some music in that dreary place!

That’s marvellous, Mr. Bunyan! What else did you do during those years?

I did some writing. I wrote a story called The Pilgrim’s Progress.

It’s about a man named Christian who left his wife and children and set out on a long, perilous journey.

Interesting. It seems that you left your wife and children, too, for a while. How did you feel about being put in prison, Mr. Bunyan?

Leaving my wife and poor children behind was painful to me, especially my poor blind child, Mary, who was dearer to me than anything I possessed.

Those must have been extremely difficult days for all of you.

Yes. My dear wife Elizabeth miscarried our first child soon after I was imprisoned. The stress of raising four children alone while I was in prison was too much for her. In the spring of 1663, my dear little Mary fell sick and died soon afterward. Oh, how that broke my heart! Three years later, in 1666, Elizabeth gave birth to our daughter Sarah. In 1672 our son Joseph was born. That was the year I was released from prison. We were so happy to be together as a family again.

By the way, you never told me how you were converted. Were you from a godly home? Was your heart always turned toward God?

No, neither of those is true. Like the Apostle Paul, I can say that God’s grace abounded to me, the chief of sinners. I was a foul-mouthed person with the bad habit of cursing and swearing. I hated myself for it, but I couldn’t stop.

How did you overcome this problem?

A woman, who was a loose and ungodly wretch, told me she trembled to hear me swear. This upset me enough to make me stop. I started reading my Bible and taking great pleasure in it.

Yes, I tried to keep the commandments. I went to church twice a day and read my Bible a lot. The neighbours thought I was converted!

No, I was still tormented by fear of judgment and had terrible dreams. One day on the streets of Bedford I saw three or four women sitting at a door in the sun, talking about the things of God. I came closer to hear what they were saying. They talked about how God had visited their souls with his love in the Lord Jesus. It looked to me as if joy made them speak. They acted as if they had found a new world.

That made you want to know God as they did?

Yes! But I always had such a tortured conscience. The devil continuously accused me of all kinds of misdeeds. I had intense feelings of desperation, guilt and fear.

One day, as I was walking in a field, a sentence came to me: “Your righteousness is in heaven.” Immediately I saw, with the eyes of my soul, Jesus Christ at God’s right hand; and I saw him as my righteousness.

What did you do after this experience?

I ran to tell my wife what had happened to me. That night I could hardly lie in my bed because I was that excited.

In 1653, the year Cromwell was made Protector; I joined the church in Bedford, where Mr. John Gifford was the pastor. He re-baptized me in a little creek by the River Ouse. I was only 25 then. Two years later, I began to preach in the surrounding villages. Hundreds of people came to hear me preach. Soon other churches also invited me to speak.

You had a successful preaching ministry?

For a while, but Cromwell died in 1658. In 1660 Charles II, who had lost his father and his throne to the Puritans ten years before, returned from exile to reclaim his crown. Charles revoked the freedom of religion we had been experiencing. Eight months after the Restoration, in November of 1660, I was arrested while taking part in a meeting at Sandwell, in Bedfordshire.

What was the charge against you?

Refusing to promise to stop preaching.

Three months in prison, but that turned into six years! I was out for a brief period in 1666, then thrown back in for another six and a half years.

Why wouldn’t you promise to quit preaching?

I was given many opportunities to conform, but I wouldn’t compromise. I told the local magistrates that I would remain in prison until the moss grew on my eyelids, rather than fail to do what God had commanded me to do.

You didn’t quit preaching, even while you were in prison?

No, Ma’am. Being in prison actually gave me new opportunities to preach. For a while, the jailer allowed me some freedom to leave my cell and preach. When my liberty was restricted, I did my preaching on paper. I wrote nine books during those first 12 years of prison.

That’s amazing! I imagine you continued preaching when you were released from prison.

Yes, in fact, the Bedford congregation called me to be its pastor on January 21, 1672, two months before I was released from prison. They showed much good faith in me. On May 9, I was licensed to preach under Charles II’s Declaration of Indulgence. During that same year, the Bedford church became licensed as a Congregational meeting place. I preached in many villages near Bedford. Sometimes I preached to crowds of 3,000 people in London. Besides preaching and shepherding my own church, I also did a lot of writing.

I hear you were a real hell-fire preacher. Is that true?

Isn’t that what the Word teaches? I wanted to leave without excuse the souls listening to me, to bring them down with a vengeance into the lake of everlasting fire.

You said you follow the teachings of John Calvin, correct?

Yes. One of the doctrines taught by Calvin was total depravity. I illustrated this with one of my characters. Badman had God-fearing parents, and if that were not enough, he had in his youth a pious master who tried with all of his wits to bring the boy apprentice into a righteous way of life. Badman was bad from the start and despised grace.

Do you also teach about unconditional election?

Yes, this doctrine is illustrated with my character Christian when he was directed by Evangelist to go through the wicket gate. He could run toward the gate and knock when he reached it, but the gate had to be opened for him. That’s God’s grace toward the elect.

Do you also hold to a limited atonement?

If you mean that Christ’s death was intended only for the elect, then yes. In John 5:37 Jesus said, “All whom the Father has given me shall come to me; and he who comes to me, I will in no wise cast out.”

Do you also believe that the “elect” are given God’s grace and are even unable to resist it?

Have you read my book, The Pilgrim’s Progress?”

Then you will remember Christian who couldn’t get rid of his burden by himself. It was only by the grace of God that awful burden rolled off his back. If we could get rid of our burdens by ourselves, then we could also cast off God. Salvation is a gift from God from the outside.

Then you must also believe that God is able to keep you throughout your entire earthly journey, until that great day when you enter the “Celestial City.”

You’re talking about perseverance of the saints. I most certainly do! For the elect, I believe the end is certain, no matter how rocky the road. I warned people not to use this as an excuse to live loose lives under the supposition, that once in Christ, ever in Christ. Anyone who used this doctrine to justify the pursuit of evil had never been one of the elect.

I see you are true to Calvin’s teachings. It may be a touchy subject, but could I get your opinion on women in ministry?

Well, I’m opposed to treating women as men’s equals. I don’t believe they should minister to God in prayer before the whole church, for then I should be a Ranter or a Quaker. I don’t even think it’s right to have separate women’s meetings without male supervision.

Why do you hold such strong beliefs about women?

I have found no precedent for women’s meetings in Scripture. The Apostle Paul argued that women should keep silent in the church. Besides, I think Eve in the Garden of Eden so badly failed that at one clap she overthrew the reputation of women for ever, but her soul, her husband, and the whole world besides.

You don’t have much good to say about women?

But I do. For as death and the curse came into the world by a woman, so also did life and health; God sent his Son, made of a woman. I truly believe they are sharers with us in the grace of life.

I’m glad to hear you say that. You had me worried for a moment. Did you expect your book to be a success, John?

No, I didn’t. It had no automatic appeal to Anglicans. A book that assumed that the papacy was a sinister, but spent force, was unlikely to be approved by Roman Catholics. Even more uncertain was the reception likely among other nonconformists. Some associated it with works of fiction. I was uneasy about getting it published and consulted several friends. I’m glad it was finally published and has been received so well. God has been good to me.

(An imaginary interview based on Bunyan’s writings. Published in the Christian Courier on August 19, 1994. This story was excerpted from a paper I wrote for my History of Christianity course in seminary.)